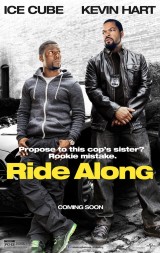 Ben Barber (Kevin Hart) is a security guard with his eyes set on becoming a police officer. He is a pre-cadet at the police academy, if that is such a thing. He spends all of his time playing Call of Duty type video games, wasting his time. Ben is also ready to propose to his girlfriend, Angela Payton (Tika Sumpter). Before he can propose, though, he must get her brother’s blessing.

Her brother, James (Ice Cube) is one of the police force’s best cops. Of course, James doesn’t exactly operate by the books. And he trusts no one. The closest he comes to trusting anyone is working with fellow officers Santiago (James Leguizamo) and Lieutenant Brooks (Bruce McGill). This trio of officers is working to bring a notorious arms dealer, Omar, to justice. The problem is, no has ever seen Omar. Not even his associates. He kills anyone who knows who he is.

To get James’ approval to marry Angela, Ben goes on a day long ride along with James to prove he has what it takes to protect Angela. James sees Ben tagging along as a nuisance. He asks the dispatcher to give him all the “annoying” calls for the day, hoping to get Ben to bail out early.

As Ben and James go through their day, neither enjoying the company of the other, James finds himself getting closer to cracking the Omar case. A case the police chief told him to stay away from, which, naturally, he doesn’t. With Ben in tow, James has a chance to bring Omar in. If he can keep Ben out of the way long enough to do so.

Ride Along is your run of the mill “cop who does things his way to get things done, regardless of what the chief wants” type of movie. It follows exactly the pattern you expect from this type of film.

Following the formula, Ice Cube executes every move, every line with the exact delivery you expect from Ice Cube in this movie. It showcases just what a badass James is. It comes across a little stunted, but it works for the film. Kevin Hart also gives you the performance you expect from Kevin Hart. He’s loud, over the top. He tries to show he can be just as badass as James, but fails miserably. Again, for the type of movie this is, it works.

There is nothing unexpected in Ride Along. I won’t give anything away, including who betrays James or who Omar is. I will just say that you can see every move coming.

That’s not to say it’s a bad movie. If you go in with the expectation of a Kevin Hart/Ice Cube cop comedy. I will admit, I laughed more than I expected. If you’re looking to fill an hour and a half, Ride Along isn’t a bad choice. You could definitely do much worse. I mean, you could have picked up a flop of a Zac Efron comedy.