The Dark Elves, led by Malekith (Christopher Eccleston), long ago harnessed the power of the Aether, a dark power from before the universe was formed. The Aether consumes everything with its darkness. It also has the power to turn an ordinary soldier into a super soldier, which the Dark Elves have used. During the last Convergence (when all 9 realms align, and the Aether’s power can be released), as Malekith was about to unleash the Aether, the Asgardian army stole the Aether and defeated the Dark Elves. The Dark Elves were all but wiped out. Malekith has not forgotten this, and plans his revenge.

Since the events in New York, Thor (Chris Hemsworth) has been busy restoring peace to the 9 realms. This daunting, but important task means he has neglected his pseudo-girlfriend, Jane Foster (Natalie Portman). Now that he has resolved much of the conflict, and the realms are peaceful, Odin (Anthony Hopkins) is ready to crown Thor the new king.

Meanwhile on Earth, Jane and her assistant, Darcy (Kat Dennings) find a dimensional anomaly. Objects dropped into a specific place will find themselves in a loop, falling through dimensions as the Convergence nears. This seems to have some relationship to the impending events the apparently crazy Erik Selvig (Stellan Skarsgård) has been preparing for.

Jane is drawn into one of these interdimensional portals, where she finds the hidden Aether. The Aether absorbs into Jane. The power that she now holds is sure to kill her, if Malekith and his elves, now searching for her to extract the Aether, don’t do so first.

Thor must team up with an unlikely, and untrustworthy companion, if he is to save Jane, stop the Dark Elves, and prevent the almost certain destruction of the 9 realms.

Marvel’s sequel to Thor, is exactly what you’ve come to expect from this new era of superhero movies. The Dark World brings in a new species of villains the demigod must confront. As with the introduction of any major character, there is some degree of back story necessary to explain who they are and why exactly they pose such a threat. Prior to seeing the film, I read that this back story is slow and overbearing. I didn’t find that to be the case. Sure, it isn’t as action-packed as you might expect a sequel to be, since we already have the origin story of the hero. But I don’t think we have had to deal with the introduction of an entirely new species like this. With the Iron Man franchise, for example, we were dealing primarily with humans. There is only so much history behind the characters needed.

Many often wonder how the Avengers side movies (Iron Man, Captain America, etc.) will deal with the “events in New York” that happened in The Avengers. Luckily for Thor, these events aren’t that out of the norm for their characters. Therefore, there is a brief mention of what happened, but it doesn’t have near the consequences that it does on Tony Stark. There is no need to harp on the subject, as it’s a regular type of occurrence for this world.

As you would expect, Chris Hemsworth and Tom Hiddleston as Loki, are the primary characters in the movie. And they do an excellent job. It would be hard to imagine anyone else being able to fill these roles so expertly. Conversely, it may be difficult for them to move past these roles. I know both already have significant acting careers, but these are such iconic roles that some may not be able to see them as anything other than the Asgardians.

Natalie Portman holds her own. As expected. And Kat Dennings provides just the right amount of comic relief. (So much better than her role on Two Broke Girls. I credit a lot of this to a better team of writers.) What I wasn’t expecting was Rene Russo as Thor and Loki’s mother, Frigga. She has been a bit of a throw away character up to this point. But in The Dark World, we see what a bad-ass she really is. It’s easy to see where the boys get some of their abilities.

As I said, the opening back story on the Dark Elves does take a significant amount of time to get through. The action really picks up when Loki takes more of a feature role in the film. That is when the action really starts. And he brings that Hiddleston charm. The second half of the film has a distinctly different feel than the first. But it all works together.

If you enjoy Marvel’s recent domination of the comic book genre, you will enjoy Thor: The Dark World. It fits in well with the Avengers franchise, and I would say that it is at least as good as the original.

Make sure you stay through all the credits. There is not one, but 2 end credits scenes. (One of them opens up the possibility of a potentially awesome cross-franchise movie series, though, I’m not sure how plausible that would be, as much as I would like for it to happen.) 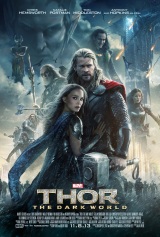