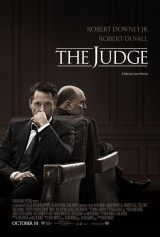 Hank Palmer (Robert Downey Jr.) is a successful defense attorney in Chicago. He defends people he knows are guilty, and wins. Innocent people can’t afford him. During a case, he gets a call that his mother has passed away. He gets a continuance to travel to his hometown to attend the funeral.

When Hank gets back to Carlinville, Indiana, his father, Joseph (Robert Duvall), a well-respected judge of 42 years, greets him very coldly. Judge, as the brothers call him, has never been accepting of Hank, due to some very poor choices Hank made when he was younger. The fact that Hank has turned his life around and made something of himself has had no affect on Judge’s acceptance of Hank. His brother, Glen (Vincent D’Onofrio), is a little warmer towards Hank, but there is definitely some tension between the two. The only one who openly welcomes Hank back is his autistic brother, Dale (Jeremy Strong). But even Dale has some reservations, reacting to pressure from Glen and their father.

The day after the funeral, Hank notices that Judge’s vintage Cadillac has been in an accident. Hank fears that his father has started drinking again, after being sober for over 20 years. When it is discovered that Judge hit and killed somebody, rather than have Hank represent him, he hires local lawyer/antiques dealer, C.P. Kennedy (Dax Shepard). Hank sees that C.P. is extremely under qualified to handle the case, especially once veteran prosecutor Dwight Dickham (Billy Bob Thornton) takes the case. Judge still refuses Hank’s expertise.

Not only must Hank deal with his father’s impending trial, but he must face his brothers and those from his hometown, while trying to maintain his relationship with his daughter during the demise of his marriage.

I love Robert Downey Jr. He is an amazing actor. He can play just about any type of character. The man can do no wrong. And he doesn’t disappoint as Hank Palmer. All Hank wants is to be loved and accepted by his father. Love and acceptance that isn’t being given. His father can’t get over a string of incidents that happened long ago. You can feel Hank’s pain in RDJ’s face in every scene. Even though the relationship is strained, possibly beyond repair, Hank is a loving son who just wants what is best for the Judge.

Robert Duvall is extremely convincing as the angry father who is constantly disappointed in Hank. He doesn’t want any of Hank’s “dishonest” lawyer tricks, and knows that honesty will clear his name. There is a scene with Duvall and RDJ in the bathroom that is particularly poignant, showing just how far Hank is willing to go to help his father. Both actors sell the scene with absolute devotion to their characters.

And don’t discount Dax Shepard. Sure, he got his start in what may be perceived by some as roles that shouldn’t be taken seriously. But even back in the days of Idiocracy, Dax was showing his potential. Every roll I see him in gives me that much more respect for him.

There are a few moments that introduce a bit of comedy to the film, to take the edge off. Don’t expect to see RDJ with his Tony Stark style of sarcasm. It peaks through every now and again. But that isn’t what is called for in this film. Dax’s character’s inexperience provides a few laughs, as well. These are more served to showcase the direness of the situation and his unpreparedness.

What I didn’t appreciate, and this may be due to a bit of heightened sensitivity on my part, was the use of Dale as a comedic outlet. As the autistic brother, he provides more than his share of “punchlines.” Sure, they may get a laugh, but it seems to be using him as the butt of the joke, just because of his autism. Aside from one critical piece of information that his obsession with filming everything, a detail that could have been otherwise introduced, there is no need to make his autistic. The audience may have laughed, but there are other ways to lighten the mood. I don’t fault the actor for this. He was playing his role, although somewhat stereotypically. I just wish the writers/director would have spun this character in a different light.

Overall, The Judge is a pretty solid film. Decent story, great cast. It had a few flaws, but not much that can’t be overlooked. And it could have been a little bit shorter that its almost 2 1/2 hour run time. That said, I don’t know that it is a film I would need to see a second time. But definitely worth a first watch.