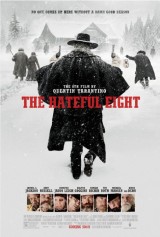 John Ruth (Kurt Russell) is a bounty hunter. He is travelling to Red Rock with his prisoner, Daisy Domergue (Jennifer Jason Leigh). As they make their way through the snow, ahead of the incoming blizzard, they come across Major Marquis Warren (Samuel L. Jackson). Once a member of the Union army, Marquis is now a bounty hunter. He is stranded without a carriage, also heading to Red Rock to collect on the bounties he has collected. The two then encounter Chris Mannix (Walton Goggins), who claims to be the new sheriff of Red Rock.

As the blizzard approaches, the group seeks shelter at a local inn. Already there are 4 other men. Oswaldo Mobray (Tim Roth), the hangman of Red Rock, Joe Gage (Michael Madsen), Confederate General Sanford Smithers (Bruce Dern), and Bob (Demián Bichir), whom the owners left in charge.

John Ruth and his travelling companions are weary of the group at the lodge, afraid they may be working with Daisy. The group must wait out the storm before they can finish their journey and collect their bounty. The question is, who can be trusted? And who will survive to make it to Red Rock?

Written and directed by Quentin Tarantino, The Hateful Eight is as much a Tarantino as any he has made.

All of the characters serve a specific purpose in the story. There are no unnecessary characters, as is typical for a Tarantino film. Everyone is there for a reason. The casting is pretty much perfect for the film. The entire cast, including Tarantino favorites Tim Roth and Samuel L. Jackson, really bring their characters to life. They push the characters to the edge, without becoming cartoonish or too over the top. Samuel L. Jackson, in particular, should have received an Oscar nomination for his part in the film. I wouldn’t have been upset by just about anyone getting a nomination, honestly.

From the wide, snowy landscape shots to the up close interiors, the cinematography is exactly what you expect from Tarantino. Inside the haberdashery, where the majority of the film takes place is where the cinematography really shines. The way it captures the brutal, over the top, violent action is well done. The story has the right amount of humor to accent the rest of the story.

If you enjoy Tarantino’s movies, The Hateful Eight will not disappoint. With a run time hitting just over 3 hours, it goes by surprisingly quickly. Having been nominated for many awards, and having already won several, it is worth seeing.