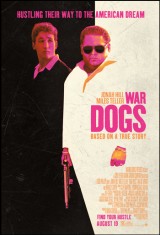 David Packouz (Miles Teller) hasn’t done much since high school. He works as a masseuse to try to make ends meet. While attending the funeral of a friend, he runs into Efraim Diveroli (Jonah Hill). David and Efraim were best friends when they were younger, despite David’s parents not wanting him to hang out with Efraim.

Despite his best attempts, David barely makes enough to support him and his girlfriend, Iz (Ana de Armas). Efraim runs a small business bidding on small weapons contracts for the U.S. government and offers David a job helping him find and win these contracts.. When David learns how much money Efraim is making selling weapons, he accepts Efraim’s offer to be his right hand man.

Due to their lack of planning and knowledge of international laws, David and Efraim find themselves in the Middle East, traveling through the “Triangle of Death” to deliver a shipment of weapons. As their operation gets larger, the stakes get higher. David and Efraim land the “Afghan Deal,” one of the largest weapons contracts ever offered. Fulfilling this deal will test their loyalties and places them in some questionable, dangerous situations.

War Dogs is based on the true story of two twenty-somethings who jump into the lucrative world of arms dealing. As with all true story inspired movies, there are no doubt creative liberties taken with the actual events to make them into a more exciting movie. Nonetheless, War Dogs is an interesting, entertaining story.

The casting in the movie is pretty much perfect for the parts as written. Jonah Hill’s Efraim is over the top in his quest for money. It is the only thing that motivates him. He will do whatever it takes to get the deal. It is reminiscent of his role in The Wolf of Wall Street. Miles Teller, on the other hand, plays a little more subdued character. His desire for money is more utilitarian. He just wants to be able to support him and his girlfriend. He’s a little more leery of the extremes they go to, and makes sure his girlfriend doesn’t find out. Teller and Hill work well together and have good chemistry.

Rounding out the leads, if you can consider him one, is Bradley Cooper. Cooper plays a man who has been banned from dealing with the government, but still wants a part of the action. He is ruthless and cutthroat, but he’s not completely without compassion. Cooper has shown he’s a versatile actor able to fill every role from romantic lead, hardcore comedy, and creepy bad guy. This role is no different, even as brief as it is.

As with most true stories, it tells an interesting tale that most people know very little, if anything, about. Often times, these are stories that many people would have a hard time believing they were not invented just for the movie. Sometimes, the stories are so dry that the film tries to make up for it by exaggerating characters, causing the film to be unbearable. (I’m looking at you Pain & Gain.) Fortunately, War Dogs doesn’t need to do this. Flirting the line between comedy and drama (a dramady, if you will), the writing team keeps things light enough to be fun while still conveying the gravity of the situation.

With the recent crop of films that have been disappointments, War Dogs not only gives some insight into a curious true story, it does so in an entertaining way. With solid performances by Miles Teller and Jonah Hill, it is a refreshing break from the summer “blockbusters” with its more subdued style. Definitely a good choice for a night out.