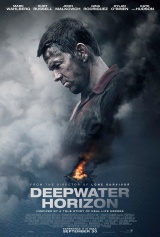 Deepwater Horizon is a floating oil rig that is sent to different locations in the Gulf of Mexico to do preparatory work drilling for oil deep blow the water’s surface. With the crew running behind schedule and over budget, BP executive Donald Vidrine (John Malkovich) visits the oil rig to get the project back on track.

To move things along, Vidrine has taken a few shortcuts. When Jimmy Harrell (Kurt Russell) and Mike Williams (Mark Wahlberg) arrive at Deepwater Horizon, they take notice of Vidrine’s shortcuts. They advise Vidrine, and their Deepwater Horizon against the ill-advised course of action. As they begin their structural testing of the oil well, things quickly get away from them.

As an explosion rips through the oil rig, Andrea Fleytas (Gina Rodriguez) struggles to keep it from floating away and shearing the pipe into the oil well. Meanwhile the Mike races to evacuate the crew as fire rages through the rig.

Deepwater Horizon is based on the true story of the 2010 explosion on the oil rig that caused over 200 million gallons of oil to spill into the Gulf of Mexico. The film does not focus on the environmental impact of the resulting oil spill. Instead, it focuses on the efforts of the crew to escape an unbelievably dangerous situation.

Mark Wahlberg stops just shy of going full on action hero in this film. His character’s heroic efforts not only helped crew members get off the rig, but almost must have helped maintain whatever level of calm was possible during the harrowing event, even if some of the account is embellished. This film is Mark doing what he does best. John Malkovich adds just enough of his Malkovich charm to make his character believable as a less than ethical BP executive. Kurt Russell and Gina Rodriguez, rounding out the lead characters, perform equally well.

At the start of the film, the technical jargon gets to be a little much when trying to understand what exactly the crew is doing and trying to accomplish. I’m sure this is included accuracy, so critics of the story, especially those in the industry, don’t immediately dismiss the film’s authenticity.

Where Deepwater Horizon really shines is where a lot of true story movies fall short, and that is in the action. Once the explosion hits, things get out of control quickly. Fire, flashing lights, and panic take over. The movie becomes disorienting. I can only imagine this is what it would have been like during the actual event. Fortunately, even in the chaos, it is well filmed. It becomes reminiscent of Titanic, if the boat were exploding and on fire. It should really be viewed on the big screen in a theater to fully appreciate everything that is going on.

Though the build up of the story starts off a little slow, Deepwater Horizon is a thrilling story giving us an insider’s look at what the crew experienced. I can’t imagine BP is particularly thrilled with the film, given how their executives are portrayed. It is an interesting view of a recent-ish story that you shouldn’t miss.