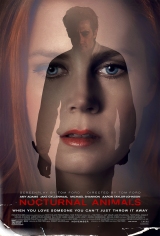 Susan Morrow (Amy Adams) owns an art gallery. While her husband Hutton (Armie Hammer) is out of town for work, Susan begins reading a manuscript written and sent to her by her ex-husband Edward (Jake Gyllenhaal).

In the book, Tony Hastings (Gyllenhaal), his wife Laura (Isla Fisher), and their daughter India (Ellie Bamber) are driving through the night on a dark, isolated road in Texas. Tony and his family find themselves stranded on the side of the road along with a car full of young men. Ray (Aaron Taylor-Johnson), Lou (Karl Glusman), and Turk (Robert Aramayo) taunt the family mercilessly. As the men work on changing the flat tire on the Hastings’ car, Ray makes unwanted advances towards India.

While Tony is restrained by Lou, Ray and Turk force Laura and India into the car and drive off with them into the night. Lou then forces Tony to drive Ray’s car, following the other men and his kidnapped family. After being abandoned at the end of a deserted road, Tony must find his way to wherever his wife and daughter have been taken, or find someone who can help track them down.

Directed and written by Tom Ford (from a novel by Austin Wright), Nocturnal Animals is a story concept unlike any film from recent memory. With its unique story and stylized look, it is an interesting film.

Amy Adams is given surprisingly little to do in this film for being top-billed. Her role consists of either putting together an odd art display at her gallery, or lying in bed reading the book. There really isn’t much to say about her performance. Likewise, Armie Hammer appears only a handful of times. Honestly, I wonder if his role is even necessary. Jake Gyllenhaal is really the star of the film. Most of the screen time is spent on his character. His performance as the desperate husband/father is well-acted. There may be a few scenes where it is just a bit overacted, but as a whole, he is solid.

The story in the manuscript is the focus of the film. It is cut with scenes from the “real world,” which seem superfluous. I was never able to figure out what the opening scene at the art gallery (a shocking opening to the film, making you wonder what the movie is going to be about) had to do with the main storyline. Nor was I able to determine why we are shown, or should care about, the relationship between Amy Adams and Armie Hammer. If you focus solely on the manuscript, it is a decent movie in itself.

Overall, Nocturnal Animals is a jarring and intriguing, if sometimes confusing, thriller. It is visually satisfying, even when the story falls a little short. If you are looking for an original film to kill some time, this is a good choice. Although, I would recommend waiting for it to come to your local RedBox, if only to avoid watching the uncomfortable opening in public.