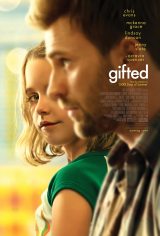 After his sister committed suicide, Frank Adler (Chris Evans) takes in his niece Mary (McKenna Grace). Mary loves her uncle and has formed a close friendship with his landlord Roberta (Octavia Spencer). Frank has been homeschooling Mary. When he has taught her everything he knows, he sends her to school. Mary finds school boring because she has already learned everything they are teaching.

Bonnie (Jenny Slate), Mary’s teacher, realizes that Mary is gifted and wants to send her to a special school for gifted children. Frank is reluctant to send Mary to the school because he wants her to be able to enjoy being a kid. Fearing that Frank isn’t giving Mary the opportunity she deserves, Frank’s mother Evelyn (Lindsay Duncan) travels from Massachusetts to Florida, where Frank and Mary live.

Evelyn files for custody of Mary. She wants Mary to follow in her footsteps and her late mother’s. Evelyn doesn’t believe Frank is capable of giving Mary the life she needs and deserves. This leads to a tense court case that puts mother against son, with Mary caught in the middle. As the case continues, the divide between Frank and Evelyn deepens.

Chris Evans, as the devoted uncle, does the best he can with the script. You can tell he truly cares for his niece and wants what’s best for her. Lindsay Duncan is just okay. As the manipulative grandmother, all she cares about is her legacy in the mathematics world. She will stop at nothing to have her granddaughter follow in her footsteps. This is played up quite a bit, accented by a performance that is a little stiff. Octavia Spencer’s character seems a bit superfluous. Not only is she Frank’s landlord, but she has a very close relationship with Mary that is never really explained. The highlight of the film is McKenna Grace’s portrayal of Mary. Outshining even Oscar-winning Spencer, she sells the emotion of the film.

The story isn’t terrible, it just could have been told better. It takes a few twists that you wouldn’t necessarily expect. While these add a little variety to the typical family dramedy, some of them are a little convenient and unbelievable at times. Pair that with a script that seems to bounce around from scene to scene with little connection, and you are left with a mediocre story.

Gifted will deliberately pull at your emotions at times. With a talented cast, it could have been better. Unfortunately, the script is just okay. If you’re looking for a change of pace compared to what’s out there, you might go see it. I would recommend waiting for the RedBox.