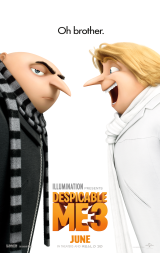 Gru (Steve Carell) has left the criminal world. His new wife Lucy (Kristen Wiig) is trying to find a way to connect with Margo (Miranda Cosgrove), Edith (Dana Gaier), and Agnes (Nev Scharrel) as a mother. Gru and Lucy work for the Anti-Villain League. They spend most of their time chasing Balthazar Bratt (Trey Parker), a former child-star who turned into a super-villain after his show was cancelled.

When Balthazar steals the world’s most valuable diamond, Gru and Lucy try to capture him. When he gets away, AVL director Valerie Da Vinci (Jenny Slate) fires them. The next day, a man shows up at their house with an invitation to go to Freedonia to be the guest of Dru (Steve Carell), Gru’s long-lost brother. Dru is the exact opposite of Gru. He is wealthy, successful, happy, and has a head full of flowing golden hair.

Dru convinces Gru to join him for one more caper – stealing the diamond from Balthazar. Gru trains him in the ways of villainy as they prepare for the heist. With Lucy and the girls none the wiser, Dru and Gru set out to get the diamond.

Despicable Me 3 forgoes what Minions tried to do and gets back to what Gru and crew do best, being bad.

Playing double-duty, Steve Carell doesn’t disappoint bringing back everyone’s favorite bad guy. His wit and delivery paired with decent writing make for another successful turn as Gru. Playing opposite him is Kristen Wiig, who adds a certain charm to Lucy. The rest of the cast is exactly what you expect from a Despicable Me film.

Perhaps one of the best things about the movie is that the Minions get out of the way. Abandoning Gru after he gets fired and refuses to turn evil again, they pretty much disappear for the majority of the film. This lets things focus on the story. Sure, some of the jokes are easy and juvenile, but it is a kids’ movie, after all. Dru and Gru may have very little in common, but they have a real connection, easy when it is played by the same person. It also spends time on little nuances, like Lucy’s struggle to be a mother to the girls. It makes for a much better film than focusing solely on the Minions, which have become loveable, but little more than sight-gags and recycled jokes.

As we head into the extended holiday weekend, Despicable Me 3 is a great choice for a family outing that will leave both young and old entertained.