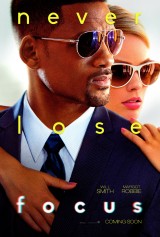 Nicky (Will Smith) was destined to be a con man. His father was a con man. His father learned the trade from his own father. Nicky has traveled to New Orleans to take advantage of the crowds gathering for the Super Bowl. He and his crew have rented a large warehouse-type space to act as headquarters for their operation. They specialize in picking pockets, stealing luggage, and identity theft.

One night, while preparing, Nicky meets Jess (Margot Robbie). Jess is an aspiring thief, who tries to rob Nicky. When Nicky easily thwarts their attempt, Jess begs him to be her mentor. After seeing Jess’ potential, he brings her in on the operation. After the Super Bowl crowds leave, and the crew has amassed a sizable haul, everyone goes their separate ways, awaiting their payday.

Three years later, Nicky is hired by Garriga (Rodrigo Santoro), a very successful racecar driver. Garriga needs Nicky to throw other drivers off the trail of his device that gives him a leg up on the competition. When a familiar face shows up as he’s about to execute his plan, things go downhill quickly.

First off, I have to say how happy I am to see Will Smith making a comeback to decent films after the disaster that was After Earth. Will returns to his charming self, sauntering all over the screen. Margot Robbie definitely plays up her…assets. She’s cute and has her own share of moments in the film. The chemistry between the two at times feels a bit forced, however. I’m going to chalk this up to writing, rather than acting. The film rushes the development of the connection between the two. Instead, it jumps from Nicky and Jess meeting to having them falling head over heels for each other.

The story is a typical con artist tale, with a bit of comedy and romance thrown in. As with any con man movie, there are more twists and turns than you can count. From watching the trailer, you will expect one story line to develop, only to have it flip to something else. It is pretty smartly done with an ending you won’t see coming.

Overall, Focus is a pretty good caper film, showing Will Smith hasn’t lost his touch. It’s a movie you have to pay attention to so you don’t get lost, but, even then, you won’t see what is coming next.